No rules? No way! 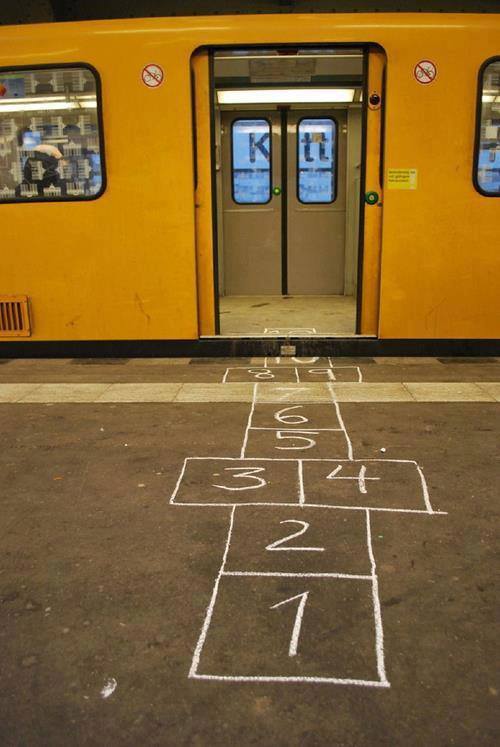 In his recent book NO RULES RULES the founder of Netflix, Reed Hastings, pretends a kind of organisational anarchy: NO RULES. From the perspective of traditional production organisations where, because of the efficiency of production, things are very tightly managed and regulated this may seem to be the case for companies operating in highly digitized sectors. Companies in the digital world seem at first sight to be much less tightly organised than their counterparts in the physical world. However, that is not true. NO RULES as an organisational principle is nonsense! Companies in the digital world also have organisational rules that provide structure and stability. Only other rules than those in classic production organisations.

No RULES RULES describes the “unique ecosystem” of the streaming giant’s corporate culture. It charts Netflix’s evolution, drawing from Hastings’s personal recollections, excerpts more than 200 interviews with current and past Netflix employees, and selections of company PowerPoint meeting slides, emails, and “culture maps.” In order to “connect the dots” and form a coherent picture of Netflix’s management style, the coauthors identify the firm’s 10 key tenets, beginning with its foundational emphasis on “talent density,” and continuing with its “culture of candor”.

Classical production organisations, all those companies on which our economy was build, have a “body of organisational rules” that regulates the production activities. Focused on efficiency and costs.

But the world has developed rapidly. Technology and society are changing and many companies have emerged and grown with a customer proposition and customer value that is 100% digital in form and in operational execution. And not physical as in the world of products. NETFLIX is a great example of this: every film, every series is fully digital, the customer interaction is digital and no human intervention is required for the “delivery” of the product. Not only films, but also software and many other products/services can now be processed completely digitally.

Therefore, the impression may arise that, according to Reed Hasting’s claim, digital companies have no rules. And to some extent they do. In the sense that they don’t have the “body of organisational rules” that traditionally guides physical production and therefore the management perspective within companies in the physical world. Nevertheless, successful digital companies have a distinct and strict “set of rules and regulations”. This set is only of a different order and nature than the dominant “body of organisational rules” in physical production economies.

Development speed is crucial in the digital world
Competition in the digital world revolves around development speed: the speed at which the organisation is able to develop the next release, with renewed functionality and customer value. And since the operational production process is “housed” on computers, the organisation and its human capital can focus to a large extent on the development of new releases and new functionality. Production is taken care of so to speak. And so, above all, employees are engaged in development activities. This in contrast to organisations in the physical world where, even when we try to minimise the human factor for cost price reasons, many of the employees are involved in the execution of the operational process.

Development activities have a fundamentally different character than operational production activities. Production revolves around efficiency and cost price. Development is about effectiveness and creativity. Therefore, and by definition, the “body of organisational rules” that is suitable for organising work in a development environment is a different “body of organisational rules” than the one that is suitable for arranging work in a production environment.

Development activities do not require “rules of the game regulating the execution of the work”, as in a physical factory, they require “rules of the game of interaction”. Meta-rules that regulate interaction between intelligent developers. Intelligent developers that we assume know how to carry out their work themselves, but that we want to provide an interaction context in which their work can be as effective and creative as possible. The diagram below shows the above idea. 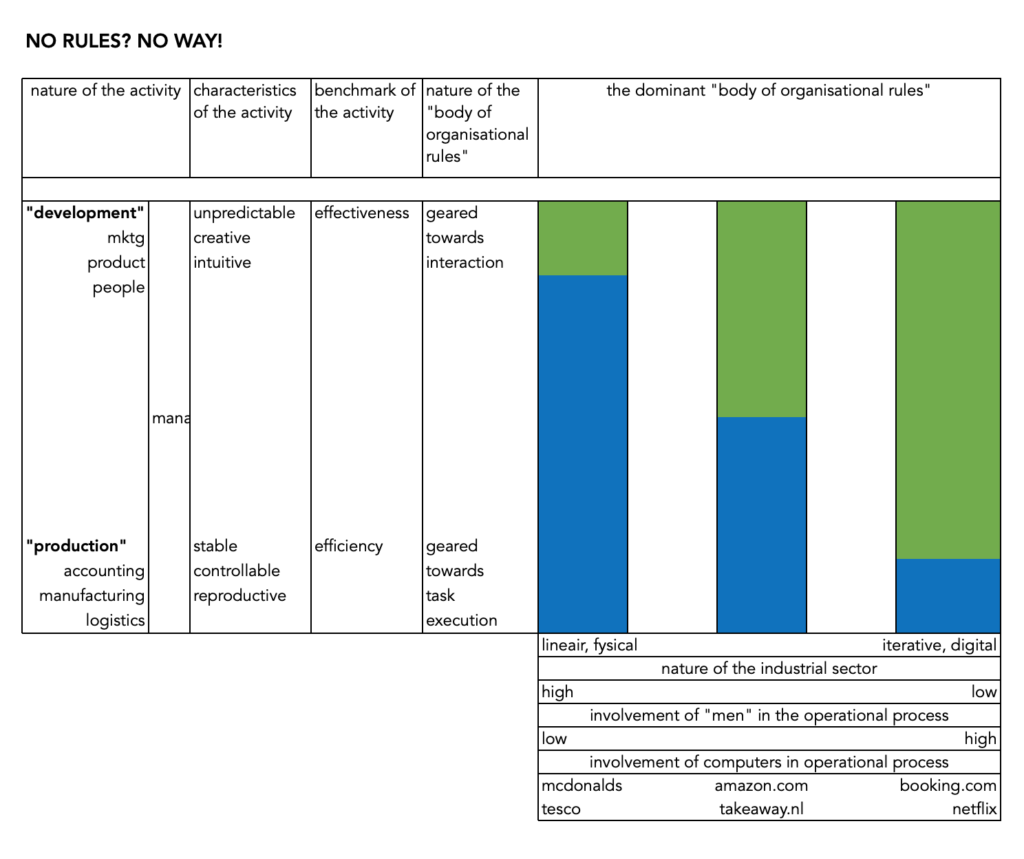 Activating roles
The building blocks of the organisational structure at Holacracy are roles. Holacracy distinguishes between roles and the people who “activate” these roles in order to express certain capacities or possibilities, perform certain functions and/or pursue certain results for the organisation. A role is not a job description; an individual can take care of several roles at the same time.

Circular structure
Holacracy structures the different roles within an organisation in a system of self-organising circles. Each circle has the power to create, execute and measure its own processes to achieve its goals. Circles organise their own board meetings, choose their own team members to fill roles and are responsible for the execution of the work within their domain. Circles are linked by roles called ‘links’. Links are part of multiple circles and align with the mission and strategy of the wider organisation.

Governance process
Each circle uses a structured governance process to create its own roles and policies. Holacracy specifies the process for this governance known as integrative decision-making. Anyone can propose or object to changes in the organisation or the board by following the well-defined structure. This system is not based on consensus, but integrates relevant input from all parties.

Operational processes
Holacracy establishes processes by which teams deal with operational needs. Each member of the circle is assigned specific tasks and has the responsibility to carry them out, allowing the circle to function efficiently and effectively. For more details on the principles and functioning of Holacracy I would like to refer to the article of my colleague Prof. Dr. Utho Creusen on https://www.vibrant-thinking.org/post/why-i-love-holacracy.

A good example of the application of the principles of Holacracy is provided by Europace AG. Europace is one of the fastest growing financial service providers in Germany. The introduction of the principles of Holacracy has led to an exponential acceleration of growth after an initial learning phase. The changes for management and co-workers were enormous.  Autonomous teams, delegated responsibility and decision-making power……, have led to an unimaginable improvement in dynamics and speed. Or to use the words of Stefan Münter, member of the Board of Directors: “I now live in paradise”. For more on Eurpace and Holacracy I gladly refer to the interview with Stefan Münter on www.vibrant-thinking.org/interviews.

Europace – We are who we are.

Around 200 people work at Europace. They all think, feel, know, learn, every day, every minute, every second. They have friends, children, families, live alone, in shared flats, in flats, houses, in the city or on the outskirts of town. They make myriad micro and macro decisions every day – to the best of their knowledge and belief, based on their needs, their experiences, their skills.

Why should they stop at the threshold of Europace?

We believe in the potential of our employees. We believe in their decision-making power, their personal responsibility and their independence. That is why we have been organising ourselves completely and comprehensively holacratically since 2018.

At Europace, tasks are no longer solved hierarchically and in departments. Individuals as superiors no longer exist, everyone works independently. And that works? Yes, because the freedom of the individual fires the creativity of all, imagined ideas are spoken out loud and tried out together. What does not work is adapted or rejected. Fast, transparent and fair. In the end, a product is created that the employees are proud of and that helps the users to work and live more effectively and successfully.

NO RULES, NO WAY!
NO RULES is nonsense! Organisations can’t do without rules. But different rules for different activities. Classic physical production organisations are strategically dominated by efficiency and cost price. Therefore, the management perspective is also strongly influenced by this. In the digital sector, efficiency and cost price are given by computer. The strategic race in these sectors requires an extreme focus on development activities. Successful companies in the digital world have a very pronounced “body of organisational rules” for their development activities. This “set of rules and regulations ” does not regulate the execution of the work, but the interaction between those who carry out the work autonomously.