What Heisenberg, Prigogine and Margulis
can teach us about business. 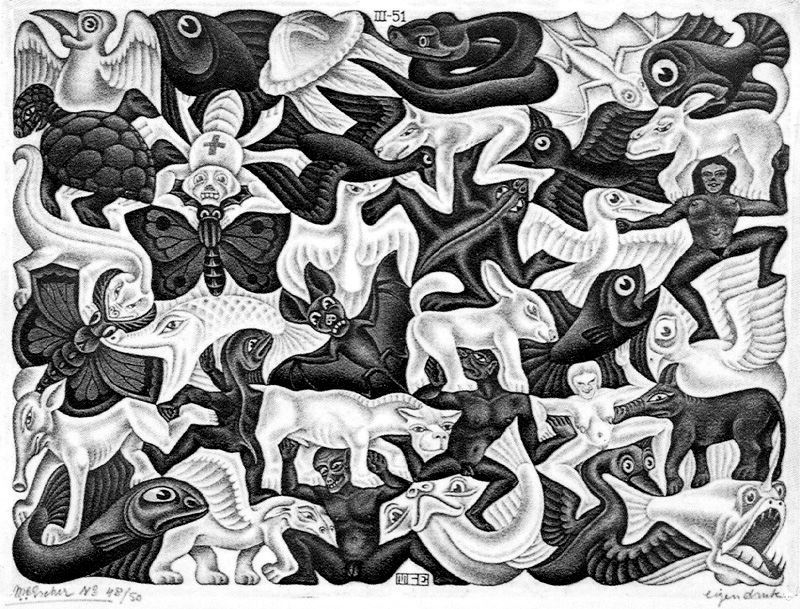 (This article was translated from Dutch using AI)

The principles of the Enlightenment: malleability, predictability and stability, no longer match the dynamics of today’s world. A world characterized by mobility, probability and permanent development. In this article I want to discuss the emergence of a dynamic view of our world. And I want to illustrate how our view of business and organizations changes when we approach them from a dynamic perspective: VIBRANT THINKING.

VIBRANT THINKING: appreciating the dynamics and complexity of our modern world
Just as 400 years ago René Descartes and Isaac Newton, both philosopher and physicist, were at the basis of an intellectual break with the Middle Ages, so in the early twentieth century it were physicists again who caused a fundamental revolution in our thinking about the world and its phenomena. Men such as Werner Heisenberg, Erwin Schrödinger and Niels Bohr after years of research and deep contemplation came to the conclusion that the principles that had dictated our view of the world for 300 years no longer applied or only applied to a limited extent. Stability and predictability turned out not to be the most characteristic features of our world and its phenomena, but dynamics, interaction and probability are at the heart of our eco-system.

Their research showed that the core of matter, the smallest particles within atoms, does not contain a hard, material small particle, contrary to what we thought for 300 years, but that at this level there is pure energy. Energy that can behave as a wave or as hard matter, but just how we look at it or with which measuring instruments we try to penetrate to the core. In this sense, at the beginning of the twentieth century, just like 300 years before, a true revolution took place in physics. Led by the aforementioned gentlemen, we discovered that the world is not stable and predictable, it is fundamentally unpredictable and dynamic: Heisenberg’s uncertainty principle. And not only on the level of the smallest particles, the core of matter, but also on the scale of the universe we discovered that the world is much more dynamic. Albert Einstein showed us that all phenomena are relative. There is no absolute truth there is only dependence. The dimensions space and time, which have been considered static for centuries, are not absolute but relative on an astronomical scale. Once again, the name speaks volumes: The Theory of Relativity. And with that we came to the insight that the dominant characteristic of our world is not stability, but that dynamism or mobility is the fundamental characteristic of our world.

This dynamic perspective, born within physics, was widely adopted. Initially mainly within Biology. Pioneering work was done by Lynn Margulis and James Lovelock who, through research, showed that the development of life did not come from competition between species (Survival of the Fittest – the classic perspective on evolution) but from meaningful symbiosis, interaction between species. The first single-cell organisms were formed many million years ago from primordial bacteria. These primordial bacteria are still responsible for the livability of our world today. They create life-conditions for our planet. Here lies an interesting parallel with the ancient Asian philosophies that assume that our life force resides in that part of our body where bacteria reign: in our belly. This is in contrast to the modern Western man who mainly thinks he lives in his head. Where our consciousness is supposed to be housed. Thanks to René Descartes, “Cogito ergo sum”, so I guess I am!

A further confirmation and elaboration of the basic principles of Heisenberg cum suis then emerged in the 1970s in the form of the complexity theory. Ilya Prigogine and Edward Lorenz were the founders of this theory. Within complexity theory, systems are seen as complex and adaptive and we speak of complex adaptive systems. Complex because they consist of many equivalent actors whose behavior is not controllable in detail, adaptive because the interaction between actors leads to constant adaptation or development of the system. Development and interaction are the essential characteristics of complex adaptive systems, in which development takes place on the “edges of the system”.

Complexity theory provides insight into the unpredictability of system behavior. There is a clear pattern in behavior, but we can never predict with certainty the next step. Just think of the flight behavior of a large flock of birds. They fly as a clear group (system), their flight has a clear pattern that is not broken (the swarm does not fall apart) but what the next turn or ascent exactly looks like cannot be predicted. Even more so, this complex behavior occurs without a clear “leader” of the swarm being recognizable. There is no bird that determines the direction and pattern. If there even is one.  The group behaves as a collective and in the interaction within the collective behavior arises. Just as well you can think of cloud formation, stock market quotations, innovation processes and thoughts in our heads. These processes can be described much better in dynamic terms than in the static terms from the Enlightenment.

The dynamic perspective, created in Physics and further developed in various scientific disciplines, Biology first of all, considers our world and the phenomena within it as a complex adaptive system in which interaction, development and probability are the essential characteristics. Within this dynamic perspective we assume a permanently evolving moving world, permanently evolving moving processes. And concepts such as uncertainty, probability, interdependence and movement are the most essential characteristics. We cannot ignore it: the system is not static but fundamentally dynamic.

In short, the world is very different from what the great thinkers of the Enlightenment have led us to believe.

VIBRANT ORGANIZATIONS: The new perspective on business
Within business thinking also, the classic static principles, as we have known them for a long time from the Age of Enlightenment, have been and still are normative within many companies. Issues of Strategy, Organization and Leadership are still approached statically within business and management thinking. As I pointed out in the article “Why Descartes can’t help us with today’s issues”, within many management models the philosophy of the malleable organization prevails. The organization like a clockwork. A Lego box. Makeable, manageable and predictable.

But imagine that a similar revolution took place within business thinking as described above. If we do not approach organizations as rigid efficiency-oriented machines but as complex adaptive systems? What would happen then? How do our ideas change if we approach management and organizations from a dynamic, vibrant perspective? Not as static structures but as systems of people who dynamically shape their future in constant interaction? How do our views on companies and organizations change if we approach them from a dynamic perspective because, as we discovered in Physics, the dynamic perspective reflects much better the core of our world.

Let me try to address these questions on three levels: Strategy, Organizational Development and Leadership. For the record, I would like to note that within this website you will gradually find many more articles on the respective pages that offer a specific elaboration of the changes within Strategy, Organizational Development and Leadership. In that sense, this article only offers a first step that is further elaborated in more detailed articles.

Vibrant Strategy: driven by Inner Purpose
Where within the classical perspective Strategy is mainly seen as a competition to be won, where we strive for a defendable competitive position and assume a hostile environment, this picture changes completely as soon as we approach Strategy from a dynamic perspective. Thus, the idea behind Strategy shifts to dynamic co-existence. Many parties in a shared context who all try to contribute to that context. Adding value. The driving force behind Strategy is not so much competitiveness but an Inner Purpose. A deeply rooted motive from which the organization acts. A thought regarding its purpose in life. The contribution it wants to make to and for the market. Compare it to the inspiration

of an entrepreneur. Ask him or her about his or her enthusiasm and you will certainly not get an answer in terms of competitiveness and the will to win. The answer goes almost 100% towards an inner conviction. Something that one believes in, is convinced of and wants to work on day and night. The goal is to add relevance to the market to people. Not winning a contest. For many entrepreneurs, continuous improvement and building an organization that matters and that will still be there in ten years’ time are many more relevant goals than defeating an imaginary enemy. At the end of the day, Vibrant Strategy is all about Long-Lasting Perspective. In the article: Vibrant Strategy – Inner Purpose as a driving force, I discuss this in more detail.

Within the dynamic perspective, we regard the organization as a complex adaptive system. A system of many actors that develop in constant interaction. The point of reference or focal point here is a Tempting Perspective which is called strategy. The basis of this complex system is Trust. Trust in the intelligence and good will of the autonomous actors, employees, in the system. This is based on the self-organized ability of people and teams, and there is room for things and initiatives to emerge naturally, also known as autopoiesis. All this is aimed at constant development. You could also say improvement. In that sense, the steering frameworks within the dynamic perspective are exactly what the word framework implies: a frame within which you work. Steering is therefore not prescribing, but facilitating (more about this under the heading Leadership). Ultimately, it is all about constant evolution. Head, heart and hands are the essential instruments. Head as the knowledge of employees, people within the complex system, regardless of role or position. Heart as the emotional commitment, the emotional involvement with the inner goal of the organization. And hands as the craftsmanship required to do your job well. And those three form an inseparable trinity. The latter is often forgotten within the static perspective. Thinking and acting are separate and involvement is of limited relevance.

In this way, the dynamic Leader is more coach than boss. He or she facilitates the process within autonomous teams in the complex system. His or her role is not prescriptive, but provides direction and options, facilitating possibilities and space. In this sense, the Leader does not work from formal Power but from Informal Authority. In the dynamic perspective there is more powerlessness than power. The great challenge of Leaders within the complex system is to provide direction and perspective from a basis of Informal Authority rather Formal. To stimulate progress and improvement. Informal authority versus formal power. This requires a high degree of humanity and empathy. Knowing how to place oneself in the other’s perspective and the ability to let others get the best out of themselves. Servant Leadership, empathic Leadership there are several concepts under which this role is often times presented.

As you can see the dynamic perspective sets completely different accents when it comes to three essential aspects of business and management. Organizations that know how to fill in and color these dimensions well we call: VIBRANT ORGANIZATIONS. Organizations that vibrate of pure dynamics and energy. Strongly driven from an “inner purpose”, in constant interaction with their environment and constantly changing form with leaders at all levels who serve and facilitate this permanent development process.